Mourvedre, or “Mataro” as it is known in its native Spain, is a thick-skinned, slow-ripening red grape that has until recently languished in relative obscurity. Lacking the star power of varietals like Cabernet Sauvignon or Pinot Noir, it has typically played a minor, supporting role in the winemaking process. When blended with other grapes such as Grenache and Syrah, Mourvedre’s dark color, strong tannins and a reductive, “animal” character add structure and body.

This combination is often found in the Southern Rhone valley in appellations such as Châteauneuf-du-Pape, but is also beginning to appear elsewhere as well, such as in Australia, where winemakers are producing more and more “GSM” (Grenache, Syrah/Shiraz, Mourvedre) wines in the “Rhone-style.” In the Rhone Valley Château de Beaucastel is well known for producing excellent Châteauneuf with as much as 30% Mourvedre.

While Mourvedre’s earthy, gamey character has dissuaded some winemakers from producing single-varietal wines with it, the Bandol appellation in Provence is home to wines made from all or almost-all Mourvedre grapes.  Mourvedre does very well in the Provençal terroir, and Bandol wines are seen as one of the best expressions of this underappreciated varietal.

In the US as well producers are starting to experiment with using Mourvedre in a more central role. In Washington State, McCrea Cellars is producing a blend of 90% Mourvedre and 10% Syrah to much critical acclaim. Well-known Ridge Vineyards in California also produces a “Mataro” made with 95% Mourvedre.

As a huge fan of Rhone-style wines I’ve had a growing interest in Mourvedre, and have been trying it in a wide variety of styles and proportions. Finding Mourvedre wines in Japan isn’t difficult, and I’ve included some links to some of the wines I know and like below. Give them a try and see what you think! The wine dinner Wednesday evening at Le Petit Tonneau’s Azabu-juban location was a great success and enjoyed by all who attended (and perhaps especially by yours truly). I go to a lot of these wine dinners, and this one was hands-down the best value-for-money of any I’ve joined.

For a surprisingly-low 8,000 yen we enjoyed five great wines from the Roussillon region of France, each paired perfectly with a dish conceived by Petit Tonneau chef Philippe Batton. (Full menu details.) Each wine was served in the “correct” glass for the grape and refilled as necessary throughout each course by the attentive and professional Petit Tonneau staff.

My favorite of the evening was the exceptional Domaine Seguela Planete, a sumptuous and refined wine made from equal parts Syrah and Carignan. The food, of course, was superb, and made all the better by the wonderful wines with which it was paired. 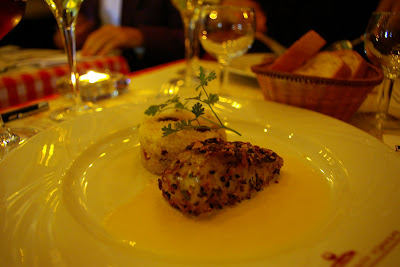 The next one will likely be held in June, and if you’re interested in joining please drop me a line and I’ll let you know how to get on the list. The wines from this week’s dinner can all be purchased online at the Petit Tonneau online wine boutique.

On Friday we unveiled a new design for our webshop, the Petit Tonneau Online Wine Boutique. Overall it’s much more clear and bright that the previous design, and also benefits from a reorganized global navigation menu and a newly-built “top page” for wines. We’re adding news wines and food pairing recipes all the time, so drop in and have a look if you haven’t visited lately. Just added this Online Wine Buyer’s Guide today and will be updating it periodically. I’ve included the well-known English/Bilingual sites for now and will follow up with Japanese sites later. Enjoy!

These are some of my favorite books on wine:

A fantastic resource for educating oneself about wine. Broad in scope, well-written and very informative, this is one of the best wine hooks I’ve read.
Windows on the World Complete Wine Course: 2009 Edition

November 23, 2008 / mrollins / Comments Off on Beaujolais Nouveau and Cassoulet

It’s November and that means Beaujolais Nouveau for the wine world here in Japan. While in many other countries (especially France, perhaps) the entire spectacle has become passe, in Japan we love our annual rituals and comfortably familiar events, and so dutifully exult in the 解禁 or “lifting of the ban” on Beaujolais Nouveau wine each third Thursday in November.

In keeping with the spirit of things I picked up a bottle on the way home on the 20th to share with R and my visiting Mother-in-Law. As is typically the case we ended up with a 35 dollar bottle of mediocre, light red wine. While the wine is touted as being light, fresh and fruity, the reality is more often than not a simple, bland and immature wine that leaves one wondering what all the fuss is about.

No surprise, then, that the thrill is starting to wear off even here in Japan, which imported a whopping 47 percent of the harvest this year. Expecting depressed sales, Suntory, a large distribtor, this year cut imports 18% to just 1.7 million liters, or the same amount consumed in all of France.

The following day we enjoyed a biodynamically created Beaujolais Nouveau with lunch at the Kunashita location of Le Petit Tonneau (great restaurants, these) which was also a bit underwhelming. Even M.C., the fellow who imports and sells the wine here, made a face after taking the first sip, and immediately had the waiter bring another wine from the same producer, Michel Guignier. While the Nouveau was purplish and bland, the Morgon Cuvee Bio Vitis that followed it was deep, rich and complex. It turns our the two are made with grapes from the very same vineyard. The difference was the 18 months in cask and bottle for the latter. Beaujolais Nouveau wines are drunk 6-8 weeks afrer the harvest, and have been “whole berry fermented” using carbonic maceration and the pasteurized. I suppose it’s hard to imagine much complexity coming from that. The Morgon, however, was excellent. At the restaurant we also had the great pleasure of enjoying Cassoulet, a wonderful rustic French stew of white beans and assorted meats, such as pork, pork sausage, duck, mutton and goose. The portion seemed small but was surprisingly filling and oh-so good! Lack of ingredients (particularly the sausage) will make this one hard to make at home, but I’m keen to try something based on the basic recipe.